Thanakha: Scent of a nation

A boy with thanakha on his cheeks 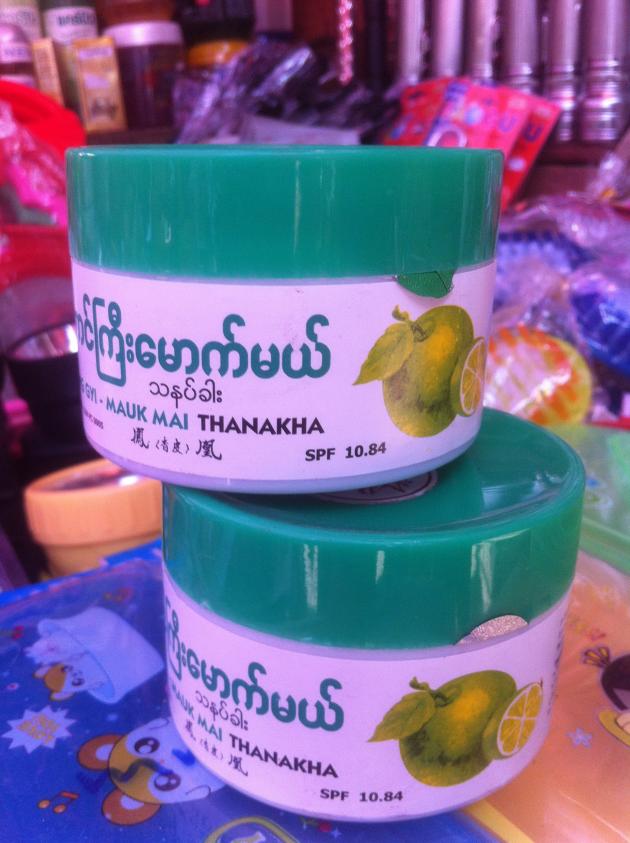 Since ancient times, Myanmar people have been rubbing thanakha paste on their faces as an effective shield against the sun's harmful rays. The yellow facial cream produced from ground thanakha bark is a much-touted beauty secret deeply ingrained in the Myanmar culture. Men also wear it quite unconsciously. Thanakha trees can be found in places across Myanmar including Shwebo in Ayeyawady Region, Monywa and Wuntho in Sagaing Region, Pakokku, Yesagyo, Taungtwingyi, and Myaing in Magway Region, Pyin Oo Lwin in Mandalay Region, Hsipaw and Lashio in Shan State, Pyinmana in the central plains, and Taungoo.

The quality of thanakha varies according to the area where it comes from. Despite the combined popularity of Shwebo and Shinmataung thanakha from Yesagyo, the latter has attracted a fanatical following among the general public ever since the locals around Shinma Mountain introduced thanakha to their gift-giving ritual that over time grew into a national obsession.

Nowadays Shinmataung thanakha has become more popular than Shwebo thanakha thanks to its much-prized lingering heady scent in contrast to the latter's fleeting whiff of happiness.

In Myanmar, cheap up-country-style thanakha products flood the pagoda-festival markets all year round. Thanakha sellers are known as the first to set up shop and the last to pack up. Brisk business is reported mostly on the first and the last day of the festival when the products are offered at a discount. Yet choosing the right thanakha can be tricky. Even to the trained eye, it's hard to distinguish between the real and the fake products on sale at these religious festivals.

Shinmataung thanakha is always in demand because of its organic cultivation. With annual precipitation of between 20 and 40 inches, Pakokku is ideal for Shinmataung thanakha farming. The plantations adopt the no-pesticides approach that organic farming demands though some don't advertise the fact. Weeds are always kept under control. Naturally grown thanakha trees produce the best thanakha characterised by its thick powdery texture with a rich, fresh fragrance.

"Shinmataung thanakha is cool in the summer and warm in the winter. The thanakha powder is mixed with water before the paste is applied [on the face and body] so it's cool when you rub it on the face. It's very good for health," said the owner of Mya Myint Moh thanakha shop.

According to thanakha shop owners, the facial cream has become too commercialised in recent years with some unscrupulous foreign companies bent on registering names of thanakha varieties as their own trademarks.

"We held a meeting on this issue in Pakokku at the end of last year. If they get the trademark, they will try to control thanakha farmers and traders like us. That means we won't be able to sell Shinmataung thanakha freely at festivals and pagoda festivals like we do now. They will try to impose restrictions on us and bar us from selling it. We won't accept a foreign country trying to register trademarks based on thanakha names like 'Shinmataung'," said a thanakha shop owner.

To keep thanakha as part of Myanmar's national heritage as long as possible, farmers in Shinma Mountain are up in arms over the possibility that a foreign company is exploiting the popularity of Shinmataung thanakha for their own gain.